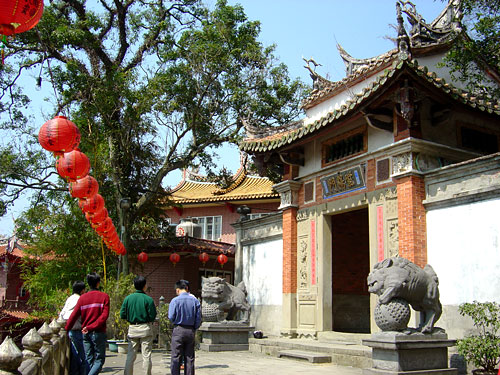 Shihtoushan (Lion’s Head Mountain) is a popular scared land for Buddhism. In the earlier years, it was one of the twelve most scenic spots in Taiwan. Temples, monasteries and shrines set in natural shallow caves on the slopes of the mountain. Among some of the more popular temples is the Kaison Temple where the Ta-chang sutra carved during the Japanese colonial period. Yuankuan Temple is on the highest ground and the oldest temple. Others like Haihui Nunnery, Linghsia Cave, Chinkang (Gold) Temple, Wanfou (10 thousand Buddha) Temple etc. There are two trails lead up to the mountain. One starts from the Nanchuan, Xitou and the other from Lioken Bridge in Hsinchu. Shihtoushan is located on the boundary of Nanchuan, Miaoli and Ermei, Hsinchu. Its highest peak measures 492 meters and is located at the southwest part of Shihtou Mountain Range. The mountain resembles of a reclining lion and that’s how it got the name Lion’s Head from. The scenery is breathtaking and serene. Shitoushan and Fokuanshan in Kaohsiong are the two of the most popular and biggest Buddhism scared lands in Taiwan.

Shihtoushan is covered with dense forest and majestic rocks. In 1892, attracted by the beauty, a Touyuan rich businessman named Zhui Pu-Ja built a modest temple in the Shihyuan Cave in pursue of spiritual fulfillment. Since then, more temples are joined along the mountain slopes. And today, this area has become an important sacred Buddhism ground.

Along the way from the entrance Suilien (Water Curtain) Cave to Shihtoushan, there are numerous temples hidden in the dense woodland. The sound of the drum at dawn breaks the serenity of the forestland and certain spiritual uplifting arouses among worshippers and visitors.

Most of the temples here are built with natural rocks and partially shaded by the surrounding dense woodland. The most popular area is at the southern part of Shihtoushan, where majestic temples stood firmly along mountain slopes and caves crossing both the Miaoli County and Hsinchu County territories. On the Miaoli territories, there are the Chuan Hua Hall, Pu Tien Kung, Chaishan Temple and Shihtou Rock. On the Hsinchu side are the Moon Viewing Pavilion, Yuan Kuang Temple, Hai Hui Temple, Linghsia Cave, Chinkang Temple, Wanfou Temple and Yuanyin Temple.

Chuan Hua Hall has the most majestic structure and the oldest history among all the temples here. The Wanya (Seeing the moon) Pavilion is at the highest point of the mountain trails, on the boundary between Hsinchu and Miaoli. A 10 minute climb westward from the pavilion takes you to the peak of the Shihtoushan. To the north, you will reach the back mountain of Hsinchu. Here, you will see the oldest Yuan Kuang Temple, formally called Shihyentung (Lion’s Cliff Cave) . Suilien Cave’s biggest temple has a small waterfall where water cascades down with a roar and looking like Pearl Curtain. Shitoushan is rich in traditional religion. With so many shrines and temples to visit, a trip to Shitoushan would be spiritual amending.